Hit enter to search or ESC to close

I’m 48 years old and a twin father. I have always sported but injured myself in my 30s (chronic compartment syndrome in the calf muscles) and had to quit football, it became golf instead. Noticed myself that I had too big a body in my 25s. Could then lose weight by myself and keep it off for a few years, but at 32-33 years of age it did not work anymore.

What attempts to lose weight had you tried earlier in life? How’d it go?

I tried “eat less, and move more” and I lost some, but then it all came back again. Tried Weight Watchers, yoghurt diet, LCD diets. With Itrim I lost 15 kg, but then up 20 kg afterwards.

Why did you choose surgery?

Two other acquaintances had performed gastric bypass surgeries with good results. Even my medical center doctor started discussing my weight. This was 2-3 years ago, I decided definitely in early 2019.

Was there anything special you were worried about before the surgery?

The unknown was scary – will I be able to eat as before or not? Of course, there was also a little fear of complications.

How did it go for you after your surgery?

Day 1-2 on mashed food I ate mashed potatoes and meatballs, but got a stomach ache and tried to vomit. I went to the emergency room in Lund and then on to you at CSK. Then there was swelling in an intestinal connection, I lay inside to observation and then had to “start over” with liquid diet again – it felt a bit chewy with liquid again but it went. Then everything has worked.

Do you have any special memories from the first time you want to share?

It was a nice feeling to know that I was leaving my “thick” life behind me. It became like a new spring with a new body, more mobile. At the same time, it was a bit scary not to really know what life would be and be like. One asked “What have I done? Is this now right?”

What was your long-term goal with the surgery?

I had a whole closet that “waited” for me at home – I wanted to get back in those clothes. Have the energy to socialize and be active with my children. Feel better. I had high blood pressure and sleep apnea syndrome.

What do you see today as the benefits of having surgery?

I almost do not snore at all anymore at night. I’m well rested in the mornings now. My blood pressure is now normal. And I’ve tried 75% of my old wardrobe!

Is there anything you miss that you can no longer do (eating, drinking, other)?

I’ve had dumping twice since the operation: one time on a double sandwich with cheese, the second time when I ate steak with potatoes. Otherwise I have tried most things but in small quantities and it has gone well.

Do you have any advice to give to someone who is thinking of having surgery for obesitas/obesity disease?

Go on, do it! I don’t regret it for a second. My life, our own and well-being are much better. I rather regret that I did not do this 10-15 years earlier in life. The positive outweighs the negative.

Do you have anything else you want to tell us about?

The treatment from people in the surroundings has changed -from looking down on you as a person because you are fat, to that you are now better treated (though you are the same person as before on the inside!). It can be a little provocative. Sometimes I take the discussion about it, but otherwise I shake it off. At the same time, of course, I am proud of my journey and the effort I have made. 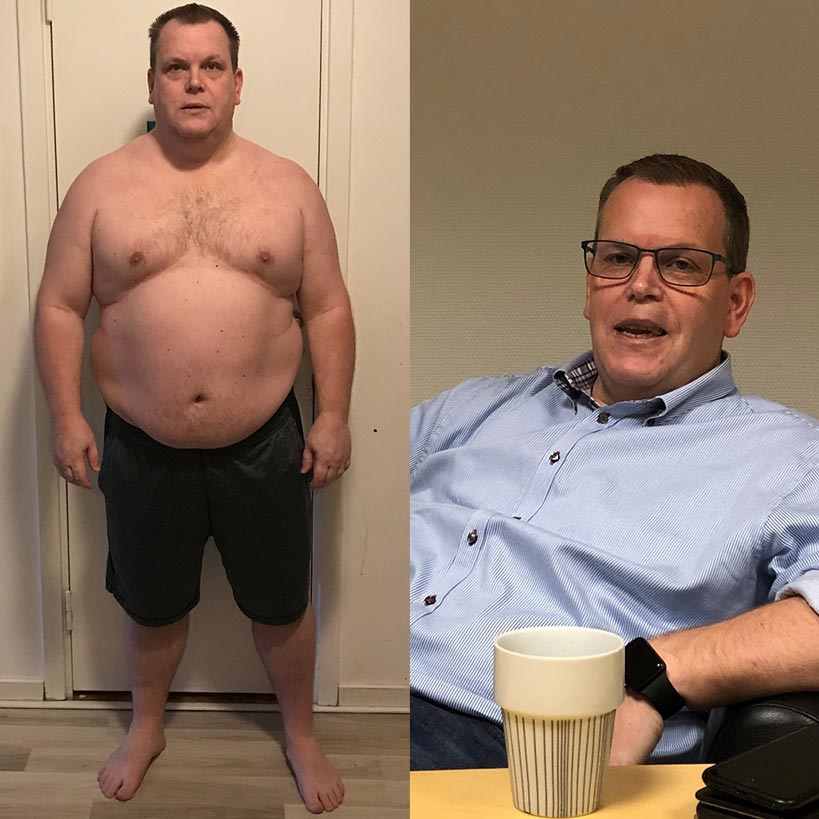