I have had problems with weight all my life and have several times tried to lose weight in different ways...

My name is Alexander Frick. I am 31 years old and live in Malmö with my partner and a cat.

I have had problems with weight all my life and have tried several times to lose weight in different ways. I have tried to eat healthy, exercise more, gone on the powder diet, various diets. At some point I’ve gone all the way and ended up at my target weight. Other times I’ve come halfway and given up because it’s boring, hard and so on.

I tried LCD diet, it was the one that I jumped on 10 years ago that made me manage to lose weight all the way down to my target weight of 75 kg. It took me 11 weeks to lose 23 kg and it still felt pretty easy in the meantime. Of course, it was the time after that was the hardest. Keeping that weight proved impossible. It was even so that I gained more weight than my starting weight.

I then tried to compensate by eating meal substitutes from time to time, but it rather made you eat even more useless meals. Usually it was meal replacement for breakfast and sometimes for lunch, and then eat a pizza for dinner and a lot of snacks after that.

The next big attempt to lose weight was with Weight Watchers. Actually a good basic idea, but hard to perform. In the long run, you got tired of counting points, especially when it came to keeping food diary in the form of recording everything you eat in an app. It meant that you could finally lie to yourself because what I did not register in the app, I had not eaten either. Therefore, I could eat something extra from time to time.

As I said, I have always had problems with weight, so I have always had the basic idea that “if you eat fewer calories than you burn, you lose weight”. But it is, like weight watchers, very sad to count calories.

My partner’s journey has been the same as mine, i.e. reached target weight but gained a higher weight than the one she started on. In August last year she chose to undergo a Gastric Bypass at GB Obesitas and to make a long story short so it went so well for her that I also decided to choose surgery as a solution. I was at her information meeting before the surgery and was told why obesity surgery is a good solution.

I applied through a self-referral in November 2019 and then got time for surgery in April 2020. Unfortunately, covid-19 came and eventually caused me to delay my Gastric Bypass surgery until August 17, 2020.

Before my surgery I went down about 10 kg (needed to lose 5 kg, but had put on a little on vacation) and then went on the powder diet for three weeks. The last week I was extremely tired of powder, so I actually switched some meals to low-calorie options, which went just fine.

On August 17, I took the bus from Malmö to Kristianstad to finally get my surgery. Everything went smoothly and I was very well taken care of. The operation itself went well and me and my roommate were very good at taking small walks with our drip trays. I had to go home again after lunch the day after the surgery, just as planned.

The first few weeks after the surgery were about trying to create new habits with the meals and trying to get out and move as far as possible. I didn’t have any major problems, either with pain or moving, so I was very happy about it. I had, unlike my partner, quite a good appetite at first, so I was looking forward to eating. It was only when I went from liquid diet to mashed diet that I began to feel some discomfort and was able to get pain when I ate. This continued even later when I switched to regular diet. I then called the emergency services and got time the following week to check if there could be something wrong. This was merged with my first control, but I told dr. Gislason that my troubles largely disappeared, but that it can come sometimes when I eat too fast. I have learned the importance of chewing the food properly and since then it has worked well with the food.

My long-term goal of operating on me is obviously to lose to a healthy weight and then keep myself there. To feel better and at the same time look better, be able to have nice clothes, be able to walk on the beach without being ashamed. It’s pretty cliché, but that’s the main reason.

Before my surgery I weighed 132 kg, today I weighed in at 105.8, so I have lost 26 kg. Then I have counted on the three weeks before the surgery when I went down by going on the powder diet.

The biggest thing about operating on me is that I feel more healthy. Maybe this is how I looked at a healthy person before my surgery. Good diets and workouts. One thing that has really changed is the disinterest in eating useless things. Candy really doesn’t interest me anymore.

I really want to advise those who go and are thinking about doing such an operation to at least contact their health centre. I know from experience that you often get discouraged from doing an obesity operation, but I can’t really understand that. For me, there are only benefits from operating. It’s a nice help you get to get to do what you’ve never done before. 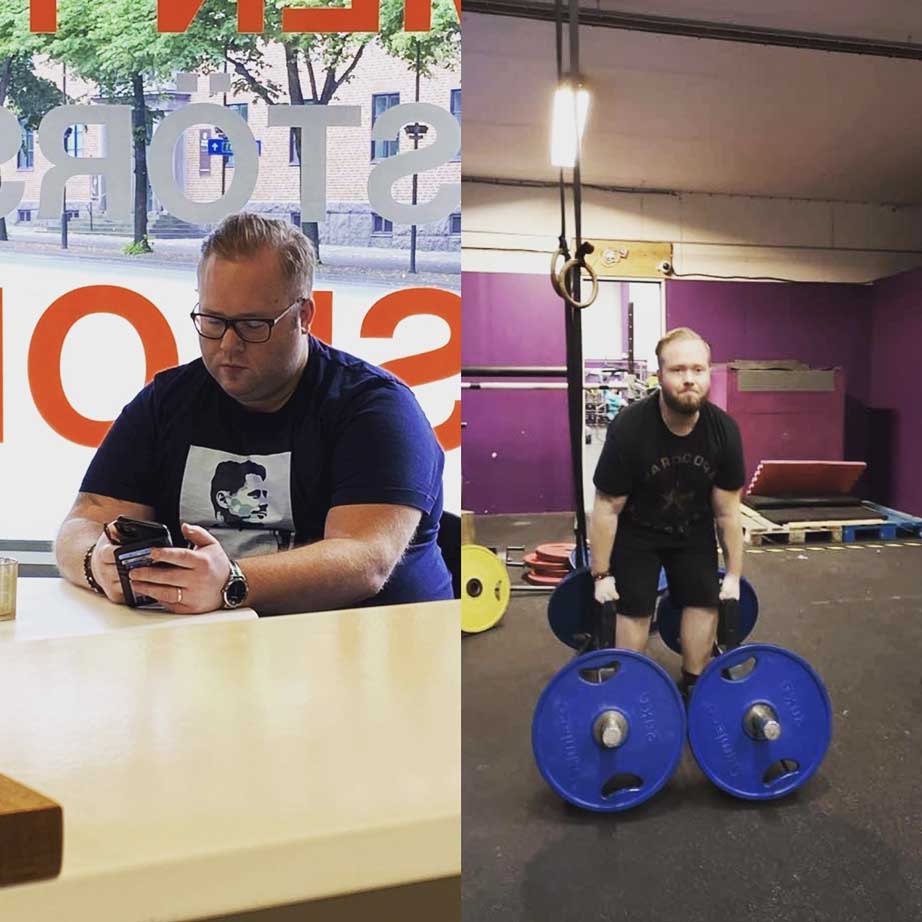